A noisy flock of crows lets me sleep in until nearly 6am and a beautiful sunrise was there to greet me on the 3rd morning of my SUP camping trip. 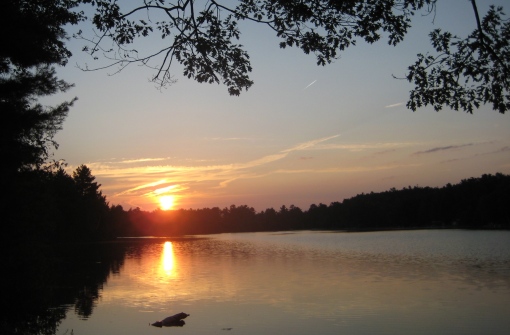 I tried the Mountain House ‘Scrambled eggs with bacon’ for breakfast for the first time.  Once the excess water is removed/consumed it’s not bad, although some of the larger pieces of egg are a bit spongy…  but at just 320cal I should have cooked 2 of them.  How far will 320cal take me on a SUP?  I add a heaping tablespoon of coconut oil to up the calorie count and then enjoy my cup of coffee. 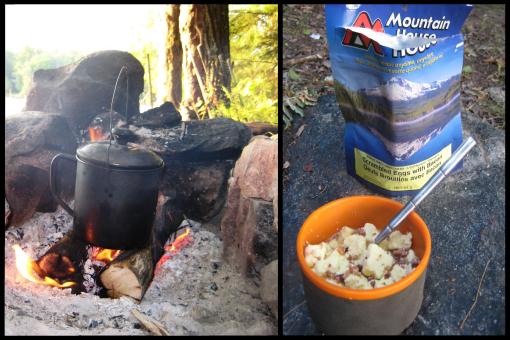 I was camped on an island on Stoney Lake and would be making my way through Burleigh Falls, Lovesick Lake and over to Wolf Island Provincial Park, just 11km if I went straight there, but I add another 5-6km as I explore the area on my way. 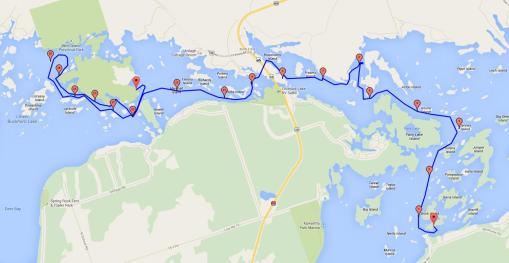 Burleigh Falls was my 1st real stop.  I take a swim at the base of the rapids, and watch some Osprey soar overhead. 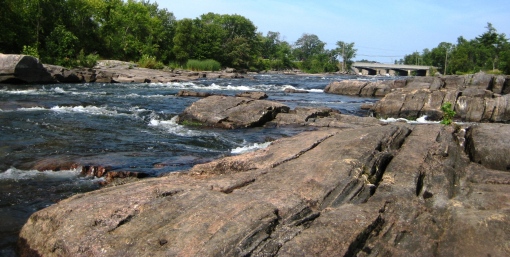 I am thankful for my lock pass as I make my way through Lock 28 at Burleigh Falls.  It’s at least 7m high and the stairs are incredibly steep!  There is no lock 29, so the next one is Lock 30 at the western end of Lovesick Lock.  It raises me just 1.1m into Lower Buckhorn Lake.  As the wind begins to pick up I explore the western shore of Wolf Island Provincial Park, stepping off my SUP occasionally to check out some of the deserted campsites.

The Ontario Parks website doesn’t have a whole lot to say about Wolf Island Provincial Park.  It is a non-operational park and there are a number of sites where people seem to camp.  I visited 4-5 of these sites and they were all very clean with little to no broken glass or garbage.  1 house boat was tied up against a small island for the night, but otherwise I had the area to myself.  I made my way as far as Black Duck Bay before heading back through the lock to Lovesick Lake, where I received a weather update from the lock operators.  “45mm of rain”, they told me in passing.  Huh?  Must have said 4-5mm…?

The site I’d chosen had an incredible view of Lovesick Lake…. 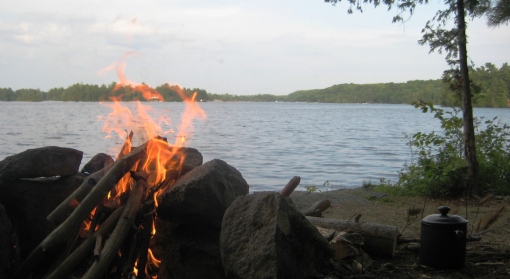 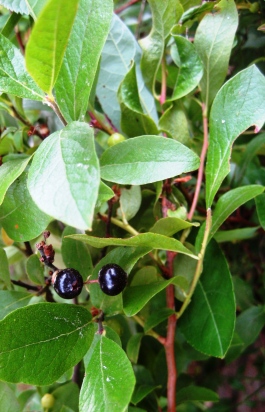 Choosing my site based on the view may not have been wise.  During the night the wind picked up and shifted, and, 40 or more mm of rain blew sideways into my site!  I woke up shivering and soaking wet at 2am.  After taking a moment to adjust my tarp against these conditions I climbed back into a wet sleeping bag and zipped it up for the 1st time on this trip.  I warmed-up slowly and then slept through the rest of the torrential downpour until around 6am. 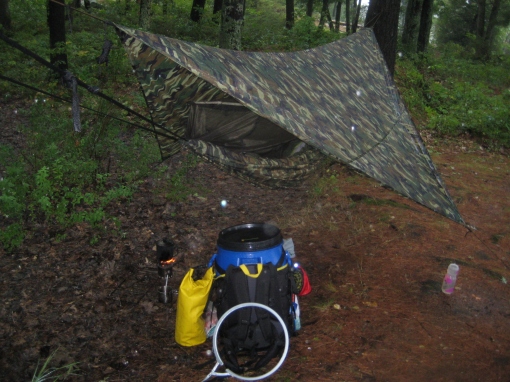 At least gathering water wouldn’t be a problem.  A few minutes is all it took to fill all of my containers with the water that was pouring off my flysheet.  I drank my fill.  I cooked breakfast over my bushbuddy stove under the tarp with some dry branches that I had stashed inside my barrel overnight.  Downing 2 ‘Mountain House’ packs of scrambled eggs w bacon and 2 cups of coffee I felt warm at last and then slept another 2 hours.  By the time I woke again the rain had finally stopped, but the wind had not.  I’d be facing quite a headwind to get where I was going…

Check out day 4 of my trip

Day 5 of my SUP camping trip would be my longest day of paddling yet.  I would eventually cover over 30km, with the last 20km into a strong headwind, but there was no reason to hurry, at least not at first. 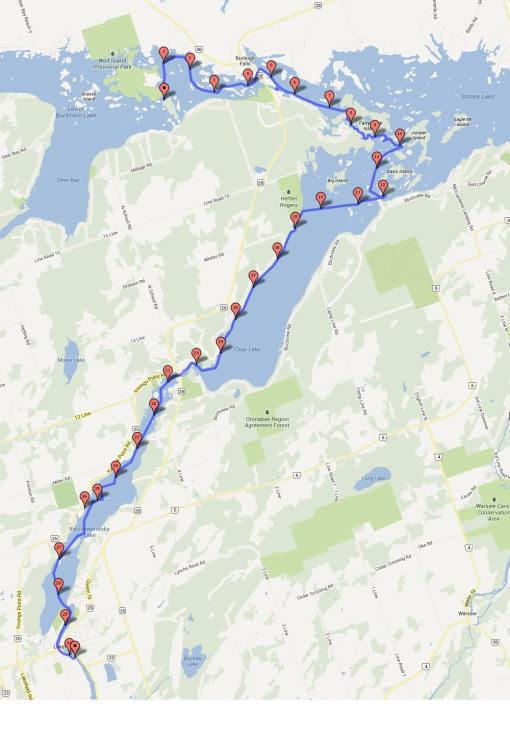 30km SUP route for day 5, taking me from Lovesick Lake to Lakefield.  – Click to zoom in

I was on my way by 830am and began by exploring the northern area of Lovesick Lake, before returning to the main channel and passing through the Burleigh Falls Lock (#28).

Another incredibly vocal Osprey drew my eyes up to the sky.

There was still much to explore on Stoney Lake.  Getting away from the main channel, I made my way through a narrow passage formed between some islands.  10min in, and the water full of lily pads, I was beginning to wonder if this was even a navigable channel.  It was like paddling over a wet carpet.  Making my way out at last, I rounded a corner into the open water and some cottagers came down to their dock to say ‘hello’.  If I recall correctly their last name was Finley.  They asked if I’d found the lost lagoon guestbook while I was in the channel.  I hadn’t.  Someone maintains a logbook of the “lost lagoon”, and it is wedged between the rocks to be signed by anyone who happens upon it.  Was it a geocache?  I had no idea.  They offered to take me to it and quickly hopped in their canoe to lead the way back through the thick lily pads. 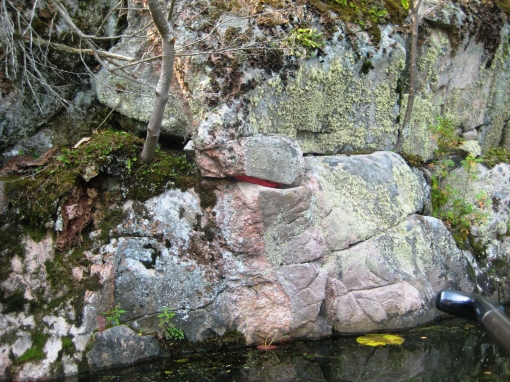 I hope some of this cottage country hospitality makes its way to Toronto.  It’s not that people aren’t helpful in the big city, but these folks are really willing to go out of their way to help someone out!  I wrote of my SUP journey to the lost lagoon in the guestbook and was on my way after another chat with Greg Finley as he shared his stories of paddling in the area and the 1000kms he once completed for a voyageur re-enactment.  Amazing!

My next stop was St. Peter’s-on-the-Rock, an Anglican Church on Stoney Lake, only accessible by boat.  I wasn’t on my way to a service, I just felt compelled to check it out while I was in the area.  Interestingly it is to be found between the areas known as “Devil’s Elbow” and “Hell’s Gate”.  Hmmmmm…. 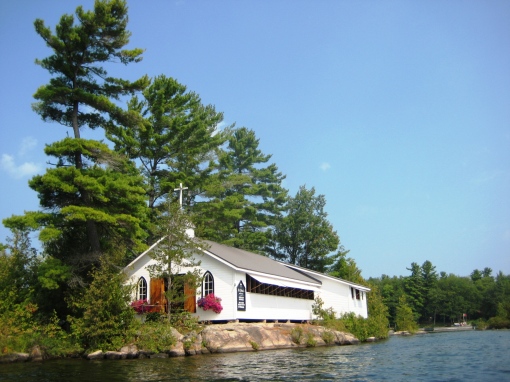 I liked my campsite on Stoney Lake from Day 3 so much that I made my way back there on Day 5 for my lunch break.  My journey home was officially underway and I had been saving a celebratory snack for this vary occasion.  I had portioned and separated all of the ingredients that I would need to make my favorite gluten-free cookies.  Making them in the field would be a first!  My only substitution was some OvaEasy powdered egg mix in place of a fresh egg.

They turned out great! 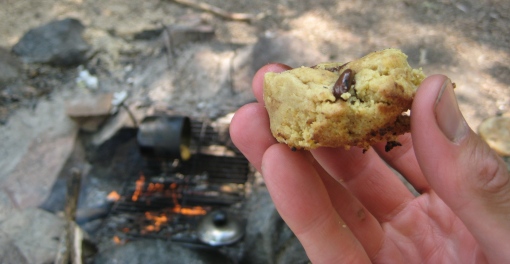 While I was indulging, the wind was picking up.  I got underway at last, and as I entered Clear Lake a strong head wind turned the waves into white caps.  Standing on a board in a strong headwind is brutal!  I knelt down for the next couple of kilometers until I was across to the west side of Clear Lake and past the worst of the waves.  It was 430 when I reached Youngs Point.  I went for a quick swim, gathered some water and relaxed for a few minutes when it hit me – I didn’t really want to camp at Youngs Point again.  It was 5pm as I set off again, the sun still high enough in the sky that I figured I could make the 10km to Lakefield, even with a strong headwind, before the sun would set.

A strange thing happens after a few days of repetitive activity.  A switch is flicked in one’s body and suddenly you feel indefatigable (or maybe it was cookie power at this point)!  I made it to Lakefield by 715, kneeling part of the way to battle the headwind, but arriving full of energy. 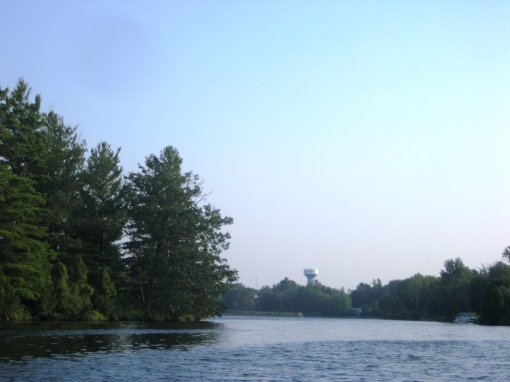 Arriving in Lakefield well ahead of the sunset

30km were covered today and it felt great.  A week ago I was wondering if this trip would be possible, or if my board would sink under the weight of me and my gear.  5 days in and not only am I starting to think about a ‘next time’, but  I’m starting to see the potential for a much longer journey.  Anyone care to join me?

Stay tuned for the last day of this adventure, Day 6 of my SUP camping trip, an easy 18km journey into Peterborough.

Day 4 of my SUP camping trip began a little later than usual.  I was only planning another 14km route so I enjoyed a slower than usual breakfast, a 2nd cup of coffee and sat by the water for a while before packing up and setting off from my island campsite around 11am.

I would eventually be heading west through Burleigh Falls, into Lovesick Lake and finally to Lower Buckhorn by the end of the day, but Stoney is such a beautiful lake that you’re going to want to take the scenic route.  I paddled along the east side of Juniper Island and made my way towards the north shore of Stoney, generally avoiding the main channel, and then traveled west.  Rounding Horseshoe Island I found a quiet and deserted section of the lake.  There is at least a kilometer of undeveloped shore and a number of cottage-free islands.  The sign I found on one of the islands suggest that it is camping friendly: 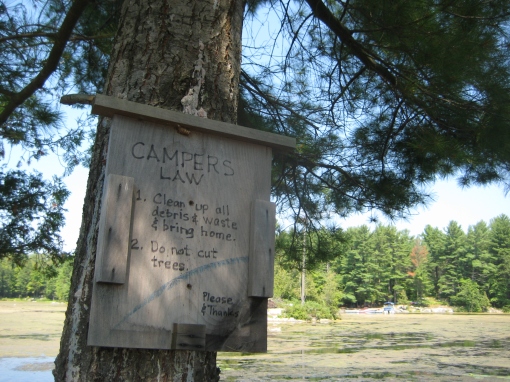 Burleigh Falls, just around the corner at this point, is another popular stop along Highway 28.  I stopped for a swim at the base of the rapids, before heading through Lock 28. 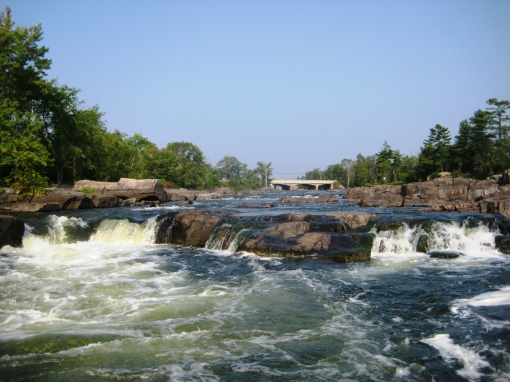 Lock 28 in Burleigh Falls is a big one.  I was not feeling like a portage, so I paid $10.80 for a lock pass and sat in comfort on my board as the lock lazily lifted me up 7 or more meters to Lovesick Lake.  According to the lock operators I was the first one to ever pass this lock on a SUP.  They took my picture as I passed, hoping to put in on the Parks Canada website. 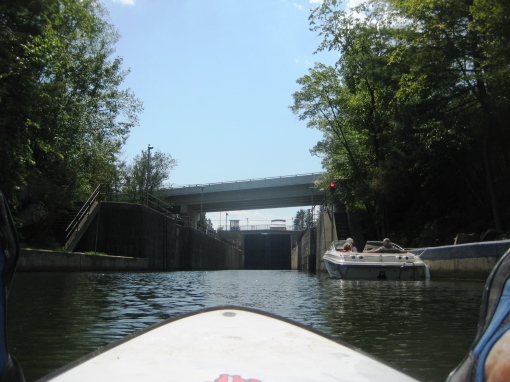 Lock 28 – Burleigh Falls, definitely worth the lock pass fee to avoid the portage

I made my way to Lock #30 at the western end of Lovesick Lake, the smallest lock in the system, rising just over a meter, and I wasn’t planning on going any further but the portaging efforts of my first day were now well behind me and I was feeling like I really should go a little further each day.  I left my gear at the lock and set off into a powerful headwind to explore Lower Buckhorn Lake. 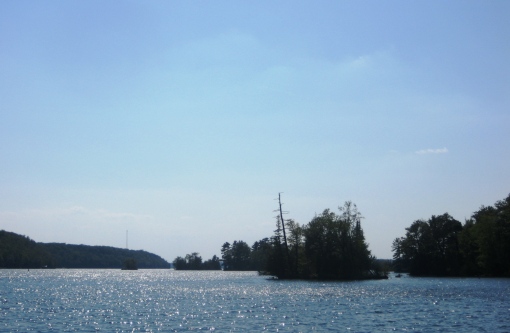 Lower Buckhorn is definitely worth exploring!  It is a beautiful lake, dotted with islands and, at least the eastern end, isn’t as developed as most lakes in the area.  The non-operational Wolf Island Provincial Park separates Lovesick and Lower Buckhorn to the north and camp sites are available on a first-come-first-served basis.  I had planned to camp in the Park but the allure of running water and a picnic table won me over on that day and I set up camp next to the lock.

Also of interest here by the lock is a canoe/kayak ramp built by the local cottagers association to make for the easiest portage ever! 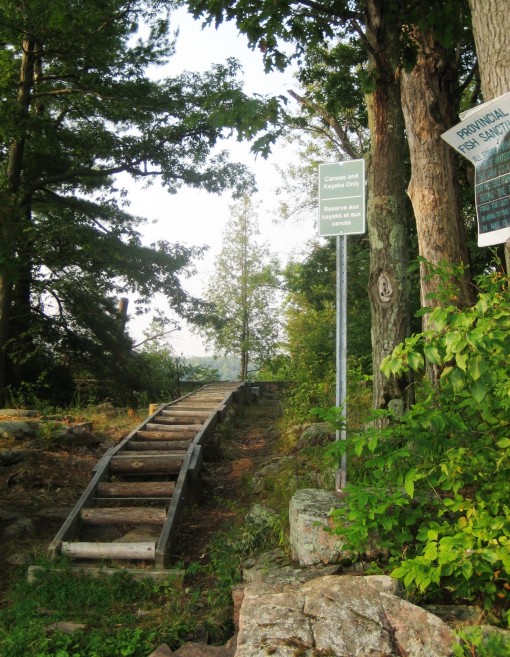 …and with the tale of any camping trip you might want to ask “So how were the mosquitoes?”.  Well, I’m glad I asked.  They weren’t bad except somehow this happened to the back of my left arm: 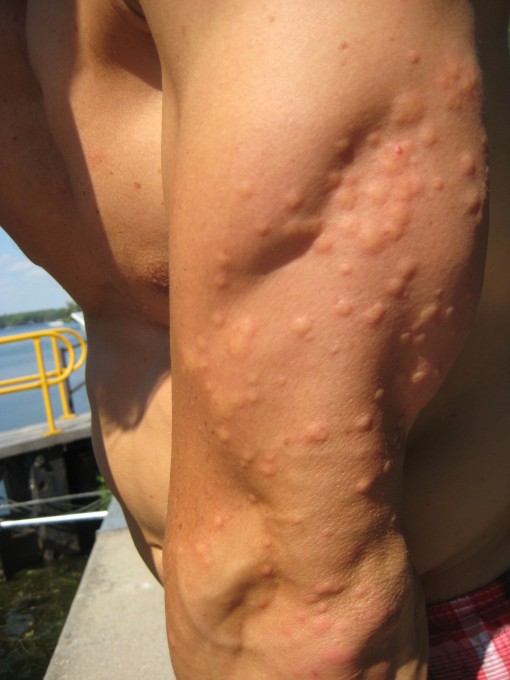 Had I slept with my arm against or outside of the mosquito netting?  I have no idea!  The rest of me was fine…

Tomorrow would be by far my longest day yet.  I would travel at least 30km on day 5 of my SUP camping trip, most of it into a headwind…